September was quite interesting month as first Crowdestate project finished and interest was paid out. Thanks to this it was a record month of passive income. I also attended to some great events – Pub meeting with fellow investors (there were about 12 other investors, some beginners other experienced investors. We had interesting talks with each other about experiences and opinions related to investing and passive income) and Investly investors night (read more about from Tauri blog and Kristi blog).

It was record month thanks to Crowdestate “Kesk tee 17” project. I also got first dividends from NOV$ and EXSA$. Bondora interest income decreased along with income from advertisements. I also decided that starting from October I will not reinvest Bondora principal nor interest anymore. I will take it out from Bondora and invest it into other P2P lending sites. I don’t like Bondora’s new course – they don’t think about small investors and nothing is clear at the moment. For example Omaraha offers a much higher return on investment at the same risk and Mintos loans have lower risk (due to collateral). 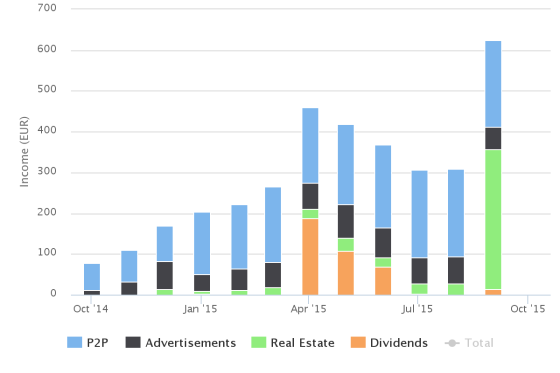 It was somewhat active month in the sense of new investments compared to previous months. I gave out one new loan through Estateguru and bought 2 different dividend stocks from the US market. Also, all interests and principal from Bondora, Omaraha, Mintos, Moneyzen were reinvested.